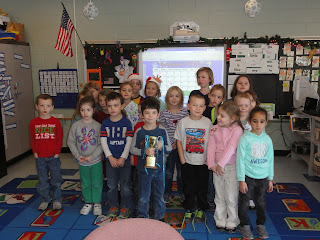 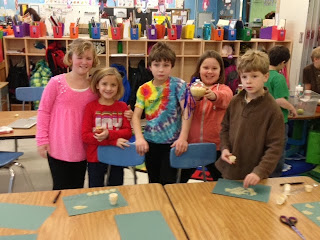 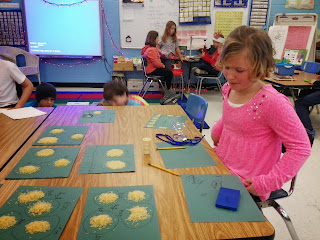 Congratulations Mrs Walsh's Kindergarten. They won our estimator cup competition. The strategy they used was to create a smaller object (tablespoon) and use 10s to count to 100, then counted the hundreds, then estimated how many tablespoons.
The results were tallied by Mrs. Konrad's 3rd grade counting crew. The 5 students started to count and create sets of 100, but realized it would take forever, and they would make too many mistakes, so they used a small cup, and filled the cup until the container was empty. The final number was 21,156. Mrs Walsh's class estimated 21,000.


*video will not display in email - click here to view.

Because BFA had a Band Concert had to be rescheduled to Thursday Night due to weather, Mr. Mehaffey decided to move the Senior Band & Jazz Band concert to Thursday January 2nd 2014 as there are many families that have students in both concerts.

There is violin lessons for 5th and 6th grade today.

There are no  6th grade band lessons today.

Mr. Mehaffey is very proud of the Jr. Band members because of all their hard work and great concert last night.

Kindergarten is going to the Welden Theatre today.

The 7/8 Basketball Teams have home games today starting at 4:00

There is no tutoring today

The City School Raiders were challenged by Our Lady of Victories Schools from the United Kingdom in a Mangahigh math challenge called a Fai-To.  After 7 rounds of competition, the Raiders defeated off their competition by earning points in a variety of math challenges and games.  Congratulation to the round heroes, Mason, Ben, Olivia, and Noah.